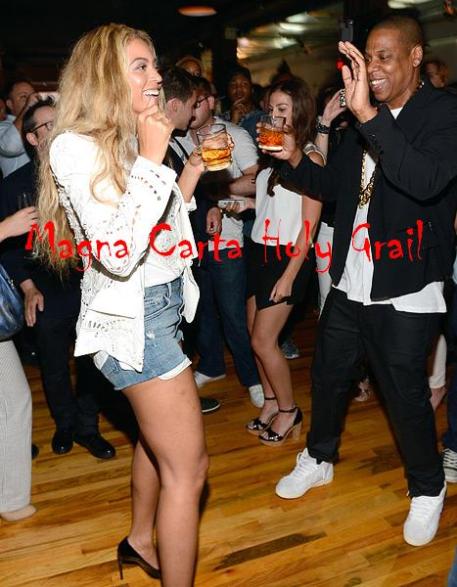 I’ve been wrecking my brain for the appropriate word to describe this musical masterpiece.  In the way that a devoted Jay-Z fan, long before critics had to eat their words and call “Reasonable Doubt” a classic, can.  The album is weightless and more succinct than “American Gangster.”  It’s chiism in verse.

I’m the girl that spent her last $15 dollars in credit to cop the “Black Album.” Smart? Maybe not, but it was worth it.  I preorder Jay-Z albums and often have more than one copy of the same album.  MCHG is the holy grail of making it out the hood but on a sicka note securing legacy.  When I say legacy, I am not referring to rather or not Jay is the G.O.A.T.—because I already know the answer to that but the point at which the sky is now your foundation not ground.

There is no titillation here.  Honestly, I’ve been waiting for this album for six years.  The boy who grew up on the mean streets of Brooklyn, specifically the Marcy Projects is happy.  “Happiness for a gangsta ain’t no love in these streets/Conspiracy theorists screaming/Illuminati/They can’t believe this much skills in the human body.”  I truly wish not to speculate that the birth of Blue Ivy was the prelude to a more immaculate Hov, from cautionary tales to pursuits of happiness to always sportin’ a smile type of peace.

And it dropped on Independence Day.

After I heard, “Open Letter,” my brain froze, the cursor would not move.  I had to reboot.   I had no idea that an album was in the near future or even a thought for him. Hell, he was still riding the celebratory wave of “Watch the Throne.”  It’s revolutionary, but not just black fist in the air.  Every compilation is like a prayer and in between release dates Jay-Z puts in the work to guarantee the fruition of his aspirations (action).

“Own boss, own your masters, slaves…”

These are my initial thoughts.